Celebrate Independence Day On The Water

This weekend, spectators all over Long Island will be gazing skyward to enjoy firework shows as we celebrate our nation’s independence.

There are plenty of firework displays that can be appreciated from the water. So pack your boat with a cooler and some snacks, invite a few friends, and watch the night sky come alive! 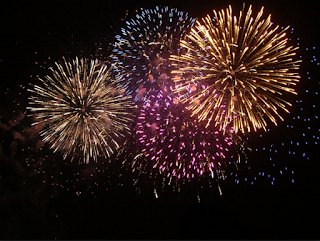 Here are a few displays in our neck of the woods:

The Westhampton Beach Country Club
Saturday, July 4th at 9 PM
Rain date will be July 5th
The country club is private, but the fireworks are visible from the Great Lawn and elsewhere in Westhampton Beach

Posted by Modern Yachts at 1:23 PM No comments:

Modern Yachts is hosting its Demo Days events for EdgeWater and Cobia from 10 - 4 on June 13 and 14 in Hampton Bays. For Sea Ray, we’ll host Demo Days on June 27 and 28, from 10 - 4.  And since people often ask us what Demo Days is all about, we’ve put together the Top 5 Reasons To Attend Our Demo Days Events.

Please plan to join us during Demo Days. You’ll be glad you did.
Posted by Modern Yachts at 11:05 AM No comments:

This year marks the 25th Anniversary of the Greenport Maritime Festival. If you've been meaning to come to the Festival, this is your opportunity!

The Festival is organized by the East End Seaport Museum and Marine Foundation, and this year the Festival features a fundraiser for the preservation of the Long Beach Bar "Bug" Lighthouse. Built in 1871, the lighthouse sustained a good deal of damage during Hurricane Sandy, and while some repairs have been done, the work is far from over.

The Seaport Festival pays tribute to all of those seafarers who draw their living or their enjoyment from the sea. It also introduces new generations to the importance of the waters surrounding Long Island, from both a contemporary and a historic perspective.

The Maritime weekend is a great time to take a boat ride over to Greenport and to enjoy early Fall weather. But come early! The Festival promises to be a popular venue, and hosts thousands of visitors during its short weekend.

Modern Yachts will be in attendance with great end-of-season opportunities for weekend boaters, fishing fans, and family boaters. We hope to see you there!

Posted by Modern Yachts at 12:12 PM No comments:

Montauk: The End
At the very tip of Long Island, jutting out into the Atlantic, lies the hamlet of Montauk. Located on Long Island’s southeastern fork, Montauk is one of the east coast’s most popular tourist beaches and commercial fishing locations. Montauk also has, at different times in its history, been occupied as a strategic military base for the army, navy, coast guard and air force.
Montauk is a popular destination for fishing, whale watching, cruising, and a wide range of water sports. Visitors also can tour the renowned Montauk Lighthouse (the first established lighthouse in New York and fourth oldest active lighthouse in the U.S.), and can visit any of six state parks. Other things to do on land include shopping (Gosman’s Dock is a popular shopping area with quaint shops), dining, bicycle rentals, sight-seeing, and other recreational activities.
Getting There By Boat
Montauk Harbor is a good waypoint for boaters with a Block Island destination. Block Island is just 12 miles from Montauk Harbor and boaters should consult weather forecasts and tidal charts prior to departure.
Montauk Harbor is one of the busiest harbors on Long Island. It accommodates the largest commercial and recreational fishing fleet in New York. Much of the boat traffic comes from the east, when larger fishing vessels travel inland. Small boaters should steer clear to avoid collisions with large wakes.
The deepest part of the channel will be on starboard side when entering the harbor. The first landmark visible is the US Coast Guard station immediately ahead. The Station is located on Star Island, which separates the west harbor from the entrance to Lake Montauk.
Gosman’s Dock is on the starboard side. Here, visitors on land can enjoy hours of shopping, people watching and dining.
The western shore is home to the town dock, which is used exclusively for fishing vessels. The west basin has slips for many commercial, recreational and fishing vessels. As you depart this area, the waterway becomes more congested. West Lake and Snug Harbor are at the bottom of the channel and Star Island Marina, a large marina, is on the east side.
The channel headed toward Lake Montauk becomes very narrow in parts, but is clearly marked. Shoals and shallow depths are present around Lake Montauk. Take care when passing buoys 5 and 7 behind Star Island.
There are ample marinas with transient slips and marine services in Montauk Harbor.
Montauk Harbor also offers good protection for seasonal or transient boaters. Anchorages include the southwest corner of Star Island, close to many marinas and with access to nearby shops; and deep inside Montauk in the southern portion of the harbor. Here, the water is about 8 feet deep, and boaters have access to nearby beaches on foot.
Montauk, known affectionately as “The End” among many, rewards thousands of summer visitors by providing breathtaking sunrises, alluring beaches, legendary fishing, beautiful scenery and memorable summer fun.

Posted by Modern Yachts at 1:53 PM No comments:

The Village of Greenport has seen many roles during its recorded history of more than 300 years. It served as a long term reservation for Native Americans, an early home to whaling fleets and the ship building industry, a site of rum running, an established “navy” boasting volunteer boat patrols seeking Nazi submarines, and most recently, as a summer destination for tourists.

Located on the north fork of Long Island, Greenport is one of the area’s oldest villages, having been settled in 1682. The folksy town, overlooking Shelter Island, is a favorite among boaters, with its access to a number of local harbors and marinas.

The three harbors around Greenport include Greenport Village, Stirling Harbor and Gull Pond.  While there are not designated anchorage opportunities, Greenport is a wonderful destination for boaters seeking to enjoy a pleasant ride, or enjoy some land borne activities.

Greenport Village
For daily visitors, the harbor at Greenport Village offers dock space through the town or at a local marina. The water is deep and open, and many larger vessels can be seen transiting. Greenport has one of the east coast’s busiest seaports, so boaters should schedule in-season trips accordingly.

The village marine area is directly across from Dering Harbor on Shelter Island.  The water in front of the village is very deep and can accommodate some very large commercial and private vessels. Smaller boats should be cautioned: while there are no real sand or obstacle hazards in the village entry, larger vessels can create large wakes, and the boat traffic can be intimidating. All boats are urged to adhere to the posted speed limit of 5 mph.

This is the heart of the village, where transient boaters can tie up and visit Greenport’s friendly streets and purchase provisions or just soak up the engaging maritime atmosphere.  Visitors can enjoy recreational activities, shopping, sailboat tours, museums, and more.

Visitors seeking a meal can choose from more than a dozen eateries, including the historic restaurant Claudio’s, which was established in 1870.

Stirling Harbor
Stirling Harbor is located just east of the village docks and inside Young’s Point, at the base of the Greenport's Jetty. Unlike the village entry, the Harbor provides greater protection from boat traffic and prevailing winds. Visitors can tie up and walk the short distance into the village.

Upon entry into the Harbor, boaters will note there is ample water. Its entry also displays a memorial to remember those lost at sea.

Visitors will note access to three marinas within the harbor.  The western shoreline is the home of several other local marinas and fishing boats.  On the east shoreline are Stirling Harbor’s largest marinas.  Eastern Long Island Hospital is visible along the northern shoreline.

Many of the smaller marinas don’t allow transients on a regular basis.  Stirling Harbor Marina, Brewers Yacht Yard and Townsend Manor Marina are the only marinas that accept transient boats.

Gull Pond
Gull Pond is located just to the east of the Greenport Jetty and is the home of many local boats.

There are no marinas or designated anchorages in the pond, but the area is a fun place to visit. Peaceful and serene, Gull Pond is ideal for exploring by dinghy. The pond is home to large vessels and a number of beautiful residences.

One of the best times to visit Greenport is in the early fall, during the Annual Maritime Festival – September 19-21 this year. It’s a terrific opportunity to visit Greenport’s historic sites, enjoy live music, observe the Festival parade, check out craft vendors and artisans, watch live maritime demonstrations, and sample some of the best food around the area. Modern Yachts will be on hand to display also! Mark your calendars and see the best of what Greenport offers.

Posted by Modern Yachts at 7:54 AM No comments:

Modern Yachts
Modern Yachts was established more than 45 years ago and has served generations of Long Island boaters. Modern Yachts is an authorized distributor of Sea Ray, Edgewater, Sailfish, Azimut and Zeelander boats and yachts. With our three on-water locations - Westhampton Beach, Hampton Bays and Mattituck - we are conveniently located near all major waterways throughout eastern Long Island.